In 2014, Tony Sculimbrene published an article about the “holy trinity” of flashlights which consisted of the McGizmo Haiku, HDS Systems Rotary, and the Cool Fall Spy 007. I could make the case for the Mac’s Tri-EDC being on that list – of course it wouldn’t be a trinity then – but it doesn’t matter. It’s 2020 now and the McGizmo Haiku’s long since been eclipsed by better options, the Mac’s Tri-EDC has been deprecated, and the Spy 007’s still too expensive for mere mortals to purchase. To this effect, there are few flashlights that have the staying power and relevance that the HDS Systems Rotary enjoys to this day.

This is the link to the official product page. The base Rotary model will run you $294 plus shipping. My particular Rotary is from the last, “low K” group-buy in 2018 held by Hogo of HDS. It sports a Nichia 219c 4000K emitter and the standard Rotary configuration. But there are numerous other options you can choose from if you opt for a custom configuration.

The Rotary uses the tried-and-true “hourglass” body where there’s a taper in the center. Ergonomically, it feels great in the hand and I have nothing to critique from a practical use scenario. Some will point out that it’s much larger than most single CR123a flashlights, but you don’t get the same grip and dexterity with a smaller flashlight. It’s a trade-off.

As for the construction of the flashlight…”overbuilt” would be conservative. There are a myriad documented torture tests on Youtube, some even depicting the HDS flashlights being shot at with firearms. Technically, the HDS Systems Executive is going to be the more durable of their two flashlight lineup (less moving parts to fail) but this is a moot point for most users. The HDS flashlights are synonymous with unparalleled durability, and features like potted electronics, dual springs, and an anti-shock design all play into this. 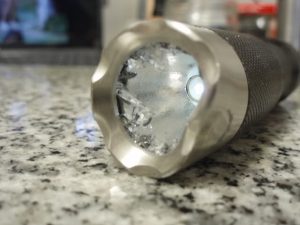 Yes, that’s literally where a bullet struck it. On the bezel, but hey. There’s also a shotgun “unpackaging”

But it’s not all sunshine and daisies. The Rotary has one major flaw, and that’s its lack of a decent retention option. Because of where the “rotary dial” is located, getting a clip onto the Rotary is a challenge. HDS has an “universal clip” that slides on, but 1) I’ve had mine slip off, 2) it looks ugly as hell, and 3) it impedes the rotary dial in practice. Suffice it to say that the universal clip is overpriced garbage. And because there’s no clip, the Rotary also rolls like a mo-fo if you set it down on its side. There are certainly some workarounds, but nothing I’ve seen that looks remotely appealing.

The rotary dial is a dying breed: They’re difficult to implement and often prove to be more trouble than they’re worth. As the Rotary’s very creative naming convention might imply, it uses a rotary dial in tandem with its e-switch. It doesn’t ramp infinitely though, and there’s 24 output levels. But this rotary dial is special in that because it’s located at the tail, you can easily actuate it with one-hand. As simple as this is, it’s something that can’t be said for a lot of other (mostly deprecated) flashlights that use a dial.

Surface-wise, function is simple. Click for “ON’ and “OFF” and twist the dial clockwise to increase the brightness and vice versa. It’s incredibly intuitive and anyone with half a brain should instantly get it. But there’s so, so much more at play because the Rotary is very much customizable. There are three additional modes (not including the rotary dial one) where you can set a specific output level or mode (ie. strobes), and there’s a myriad of additional functions:

These are just the main ones. The beauty is not just the fact that these features exist, but also that programming the flashlight is thought out very rationally. Once you’ve set most of them, you’ll never touch them again. And if you don’t want these features, you never have to worry about stumbling upon them because there’s a program lockout.

This is my favorite beam of any flashlight. Yeah, it looks kind of shitty in the picture, but that’s also why I don’t really trust beam shots (or my poor photography skills). The hotspot isn’t nearly as pronounced in real-life, and it transitions wonderfully striking a good balance between throw and flood.

Now let’s drop a little bombshell for all my lumen whores: The Rotary maxes out at 200 lumens. That’s garbage! My “X” flashlight can do well over a thousand. That’s more than likely what you’re thinking, so hear me out because there’s good reason why the Rotary will likely beat out your kilo-lumen flashlight in practice.

First, you don’t need anywhere near kilo-lumen output in most daily use. Think about it rationally: How often are you actually using the max output other than to flex? Sure, it’s nice to have, but more often than not it’s overkill. Second, the difference between 200 lumens and 1000 lumens is probably a lot smaller than you think. This is because our eyes perceive light logarithmically, not linearly. It also helps that HDS Systems individually calibrates their flashlights to the true, stated output. Most mainstream manufacturers are just giving you an estimate (or blatantly overstating the numbers), and this approach also fails to account for differences in LED bins.

Regardless, there are clear advantages to a tempered, reasonable output – efficiency, reliability, and runtime just to name a few. The following runtime tests were run with both “Automatic turn-off” and “Burst” disabled at the max output.

Runtimes on paper are good, not exactly impressive. But there’s a caveat here. If you can adjust the dial on the fly with a flick of your finger, you’re probably never using more output than you actually need. Conversely, you’re often going to be using more output than is necessary with a traditional flashlight that has set modes. In a nutshell, this is why I like to place more emphasis on real-life usage than on paper specifications. From a technical standpoint, the Rotary is a beautiful thing, and I can’t think of any other flashlight as intuitive and featured.

There’s one other contender on the market, and it’s the Jetbeam RRT-01 which also has a rotary dial and comes in at a third of the cost. But it likewise has a fraction of the Rotary’s features, versatility, and overbuilt design. Buy it if you’re on a budget and want a good rotary dial flashlight for the price. If cost isn’t a concern and you want the best then go with the Rotary. It still undercuts most custom flashlights despite the recent price-hikes; it was revolutionary in 2010 or 2011 when it was released and very little has changed that.

There is no mistake in my mind that the Rotary has hands-down the best user-interface of any flashlight on the market. From a practical, technical standpoint, I would argue that it even beats out the Oveready BOSS. But the Achille’s heel that keeps the Rotary from A-grade status is the lack of a good clip which is essential for any good EDC flashlight. This can be mitigated with a good holster; however, if you’re like me and live in an urban environment, it’s a bit of a stretch. Plus I get boomer vibes when I use the Rotary with my holster.